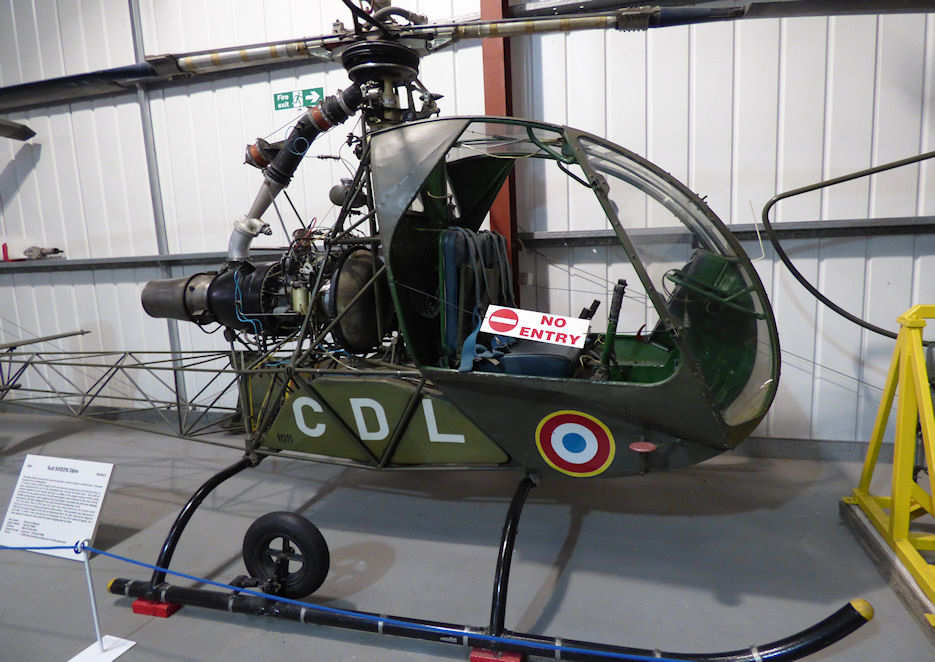 Note: Used a turbine engine with an oversize compressor and ducting which piped compressed air out to the rotor blade tips to drive the main rotor.

Details: The Djinn (Pixie) featured an unusual dynamic system, based on World War 2 German research into jet helicopters. It used an early turbine engine with an oversize compressor unit and ducting, to pipe compressed air out to the rotor blade tips to drive the main rotor. This cold-jet system required no anti-torque tail rotor, a rudder in the engine exhaust efflux being sufficient for low speed control. The all-metal blades were attached to the rotor hub by flexible spring leaves, which replaced the usual hinges to provide the pitch and flapping movements, and also originated from early German development work.

Development of the S01220 Djinn, began in 1951 and the first single-seat prototype made its initial flight on 2 January 1953. The aircraft was very basic with a simple tubular steel framework and a rotorhub similar to that used on the Ariel III and previously by Doblhoff. The S01220 was followed into the air by the two-seat S01221 Djinn on 16 December 1953. Two weeks later this aircraft set up a new world altitude record for helicopters weighing less than 500 kg (1100lb.) by reaching a height of 4789m (15,712 ft).

A pre-production contract for 22 S01221s was placed by the French ALAT (Army Air Force) in early 1954 and these were followed by the manufacture at La Corneuve and Rochefort of a further 150 aircraft, mainly for use by the ALAT in Algeria for liaison, medical evacuation and observation work. Following the granting of a French certificate of airworthiness on 2 May 1957 Djinns were also sold for civil crop-spraying, mountain rescue work and other operations. Early in 1957 a Djinn was used to set up a new world altitude record for all helicopters, climbing to a height of 8458m (27,746 ft.) The Djinn was the first French helicopter to enter production and the world's first mass-produced jet helicopter.

The Djinn in the museum's collection on was the 108th production S01221S and the 58th example for the ALAT, first flown on 7 April 1959, and delivered to the CEV at Rochefort on 21 May. It entered operational service with the ALAT on 12 June 1959 and, over the next four years logged some 563 hours on training and observation missions in Algeria with the 1st Parachute Battalion de Choc helicopter detachment. In July 1963 it underwent a major rebuild with HeliServices at Marignane before returning to ALAT service. It subsequently operated for a short period with the 27th Alpine Brigade, based at Grenoble, in August-September 1964 and then, from 5 August 1965, with the Ecole d'Application du Train at Tours. It was retired from operational flying at the end of 1968 and was assigned to the ALAT storage facility at Versailles-Satory on 21 January 1969, later moving to a store at Rennes-Bruz on 11 November.

Subsequently the helicopter was purchased privately circa 1970 by Mr Vistel of Phitagri and retained for possible spares recovery, before later being sold to Mr Davesne at Charleville-Mezieres. The aircraft remained in storage until 1990 when it was refurbished to static display condition and offered to the Helicopter Museum. After some enforced delay, due to the need to obtain a French military export licence, the aircraft arrived at Weston-super-Mare on 22 May 1991. The purchase of this helicopter was made possible by a generous grant from Aerospatiale Helicopters, the successors to the original Sud-Ouest company.