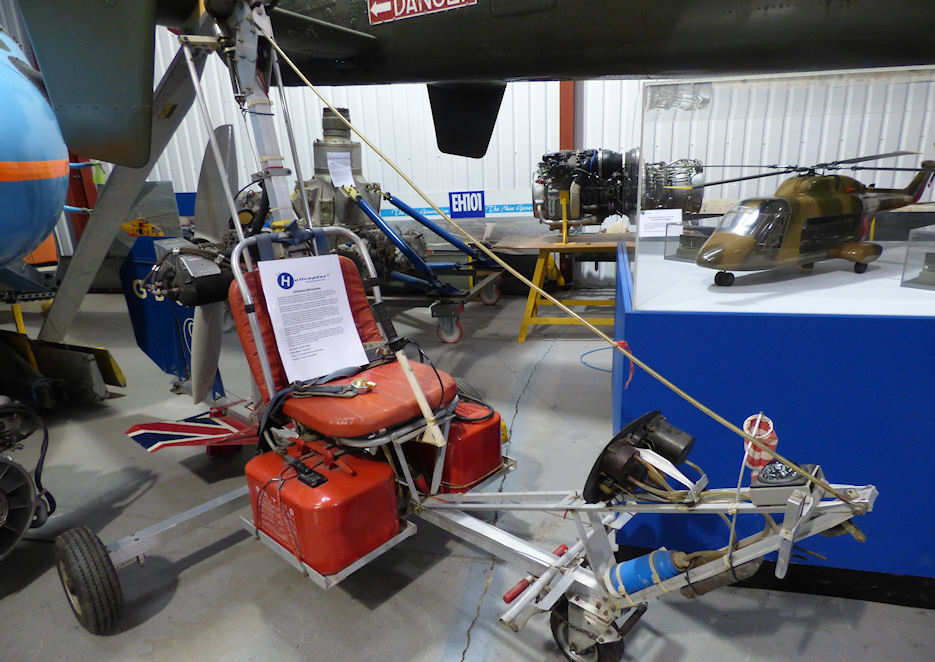 Note: This example of the B.8M never flew as the engine chosen had insufficent power to get airborne.

Details: The origins of the Bensen Gyrocopter date back to World War II and efforts to develop a foldable autogyro as an alternative to the parachute by the Airborne Forces Experimental Establishment at Ringway, Manchester.

Subsequently examples of the 'Rotachute' were sent to the USA where Igor Bensen adopted the idea, introduced a two-blade 'teetering' rotor, and developed it into a kit-build gyrocopter for personal use. The B8.M was introduced in 1957 with various improvements, including a floor-mounted cyclic stick instead of the previous overhead hanging control.

By 1980 more than 4000 Bensen gyrocopters had been supplied as kits, and variously powered by motorcycle and Volkswagen air-cooled powerplants, producing around 72hp.

This example was built by K. Brittan at Westbury-on-Trym, Bristol, who manufactured his own wooden rotorblades and powered it with a 173cc Victa two-stroke engine. This was insufficient to allow it to fly. Work on the project continued from 1984 to 1991 and was abandoned following Mr Brittan's death in 1992. The aircraft was donated to The Helicopter Museum by Mrs Brittan in 1995.