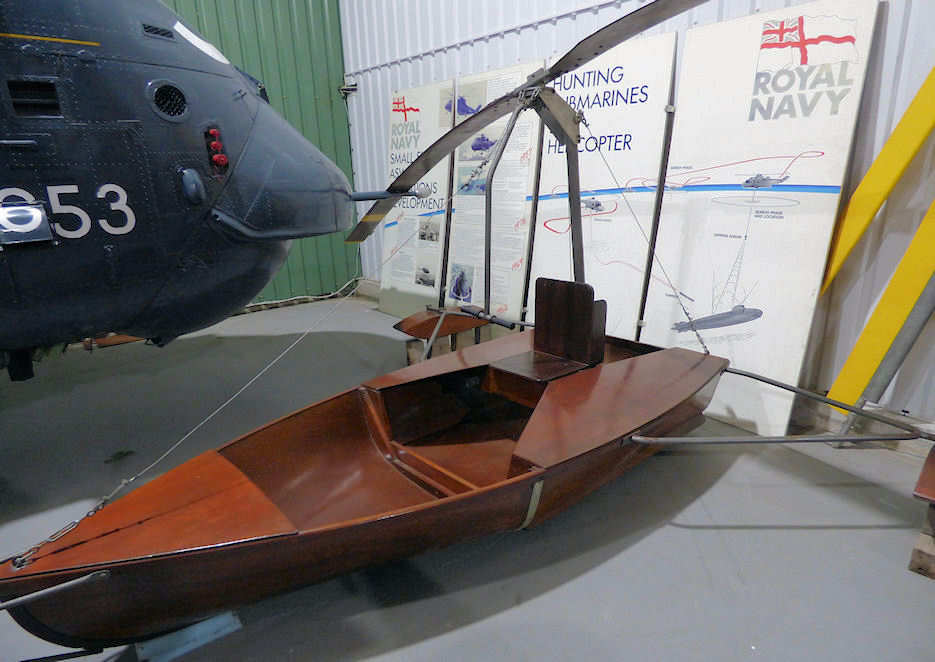 Note: The towed gyroboat was developed from the Hafner Rotachute man-carrying gyro glider, developed in the UK in the early 1940s, and the similar Focke Achgelis FA330 towed by German U-Boats during WW2..

Details: Built during 1959 at Glasgow, unpowered single-seat flying boat autogyro. Developed by gyrocopter designer and manufacturer Igor Bensen as a variant of his B-8 Gyro-Glider in 1956, the Gyro-Boat adapted the basic free-turning two-bladed rotor system, so that it could be mounted on a cut-down plywood dinghy. The original concept was understood to be based on the unpowered Hafner Rotachute man-carrying gyro glider, developed in the UK in the early 1940s, and the similar Focke Achgelis FA330, towed by German U-Boats during WW2. A prototype was first flown on 25th April 1956 and was followed by the production model in July 1956.

To launch the Gyro-Boat, it was towed with an ordinary water-ski rope behind a speedboat capable of at least 50km/h (20mph). It usually became airbourne at about 15km/h (25mph) after a short run of about 92 m (300 ft) across the water and cruised at a rotor speed of 350rpm. Height reach usually depended on the length of tow cable, recommended as 46 m (150 ft), although a longer rope (not usually less than 92 m/300 ft), was actually used as the pilot gained proficency and confidence. Landing speed, with a slack or disengaged tow cable was about 1.3 km/h (8 mph). The Gyro-Boat was supplied to customers as a complete boat with rotor system for £200, or the rotor dynamics could be purchaced seperately for £169.

This example was built by the General Developments Company Ltd (GDCL) of Glasgow. GDCL built plywood and subsiquently, glass fiber yachts to the design of a Mr Charles Violet of Glasgow, Scotland. An adjacent factory unit was occupied by the King Aircraft Company Limited who shared directors with GDCL, and in 1959 the partnership purchaced a set of plans from the Bensen Company of the USA.

Using the plans, GDCL built and sold approximately 10 Gyro-Boats, with a cut-down plywood varnished dinghy as the basis and building up the main rotor system with aviation standard materials obtained from neighbouring King Aircraft. The main rotor blade was of plywood with a tapered brass inset for strength and lead streamlined weights near the tips. As on the original Bensen design, this retained a constant angle of attack, given the lack of torsional stiffness of the blade.

Manufacturing was carried out part-time, alongside the boat building and eventually came to a halt in the early 1960s after the King Aircraft Company changed ownership and the supply of 'cheap' materials and their use of the apprentice shop dried up.

At least one Gyro-Boat was shipped to Sweden for demonstrations under the aegis of The Perkins Outboard Engine Division of the Perkins Group. Getting the Gyro-Boat airbourne required a fairly powerful speedboat, capable of reaching speeds of at least 30mph and Perkins were keen to demonstrate that their outboard engines could match the likes of Evinrude and Mercury. Another machine was sold to the Helice Speed Boat Club in St Denice, Paris and a third went to a US Navy group at the nuclear submarine base in Holy Loch for off-duty relaxation. Others were sold privately in the UK after promotion at boat shows and on the Thames in London, which produced some national publicity. Most appear to have been converted back to a more conventional dinghy after a relatively short flying career.

The Gyro-Boat at the museum was purchased by a Mr McGill. It was test flown once on a Scottish loch with his son Gordon as pilot, but both were then grounded by the pilot for safety reasons! In the late 1990s it was restored by Gordon McGill and donated to the Brooklands Museum, before being transferred to The Helicopter Museum in October 2003.