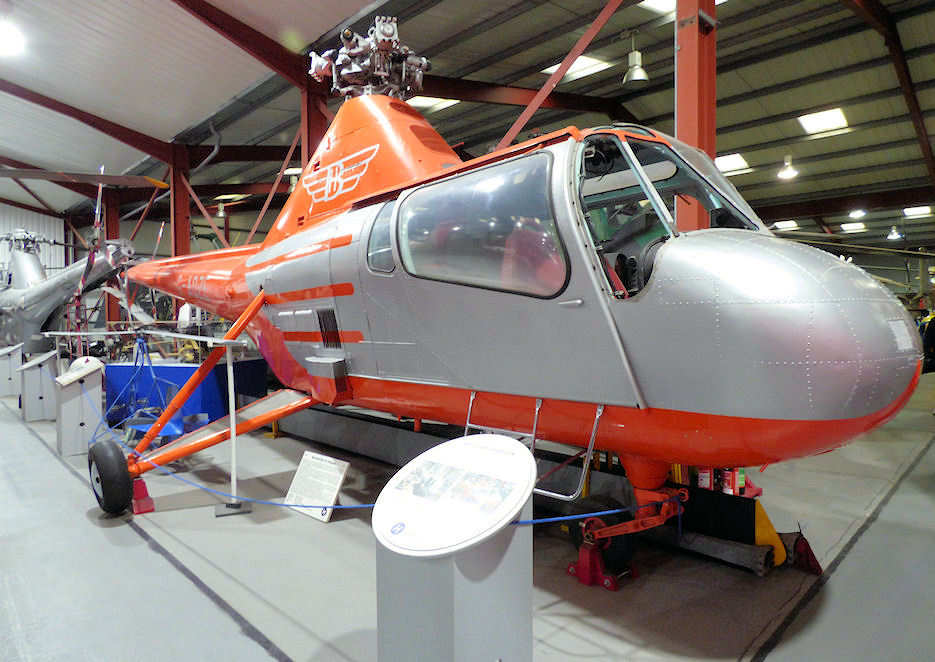 Note: Used by Bristow Helicopters in Bahrain and in Nigeria for offshore oil rig support. In 1967 during the Biafran civil War it was kept on one of the oil rigs so the Biafran Army could not requisition it.

Details: The Widgeon, a 5-seat general purpose helicopter first flown in 1955, resulted from a major re-design of the WS-51 Dragonfly including an extended cabin and the choice of the more powerful 520hp Alvis Leonides 521/2 nine-cylinder radial piston engine. A new rotor head, evolved from that used on the WS-55 Whirlwind, was fitted. A total of 15 Widgeons were built by Westland at Yeovil, three of which were WS-51 conversions.

G-AOZE/5N-ABW, a production machine, was built in Yeovil and first flew in July 1957. In 1960 it was bought by Bristow Helicopters, shipped to Bahrain and used to service offshore oil drilling operations in the Persian Gulf, being fitted with pontoon floats in some locations. In 1962 it was transferred to Bristow's subsidiary in Nigeria, based at Port Harcourt, re-registered as 5N-ABW and allocated to Shell-BP for oil support work.

After the Eastern State of Nigeria announced secession, in May 1967, oil production declined to such an extent that 5N-ABW was flown to the relative safety of one of the off-shore rigs before the Biafran Army could requisition it. When Bristow finally evacuated Port Harcourt in July 1967 three of Bristow's remaining Widgeons had to be left behind and two of these were eventually flown by the Biafran Air Force. Michael Draper's book 'Shadows - Airlift and Airwar in Biafra and Nigeria 1967-1970' (Hikoki Publications 1999) gives a superb account of these and other aviation-related events during the conflict.

In 1970 G-AOZE / 5N-ABW was returned to Bristow in Redhill, England, and donated to Warden Park School in Cuckfield, Sussex. The school rebuilt and renovated it but eventually had to sell the machine. It was acquired by Elfan ap Rees, Chairman of The Helicopter Museum Trustees, joining the growing collection in Weston-super-Mare on 29th April 1986. Long-term restoration was started in 1994.

In June 2003 the Widgeon was collected from The Helicopter Museum and transported to St.Mawgan, in Cornwall, where it was painted in its 1958 Bristow colour scheme, before being taken to RAF Fairford in July 2003. G-AOZE was returned to The Museum on 19th August 2003 and was put on public display in the Main Hangar where the remaining restoration work was completed with the fitting of cabin seats in March 2006.