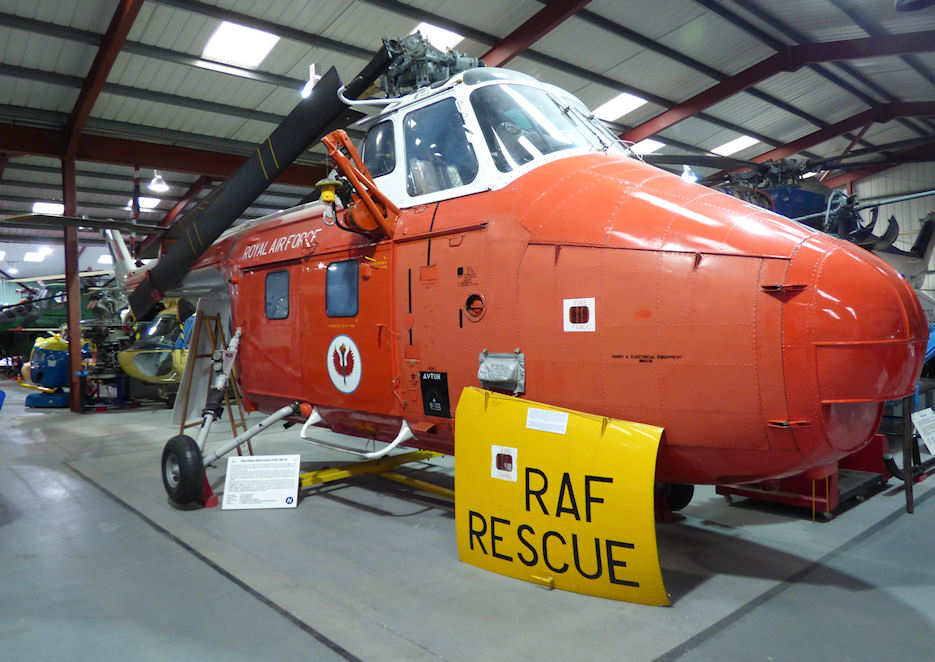 Note: This was first Whirlwind delivered to the RAF. It operated in Malaya, and was later converted at Weston-super-Mare to turbine power for Search and Rescue duties in Cyprus and Aden.

Details: The availability of the much smaller and more powerful turboshaft engines in the latter 1950s led to Westland receiving an order to convert a number of early piston-engined Whirlwinds to turbine power, as well as building new production as the Mk.9 (Royal Navy) and Mk.10 (Royal Air Force) aircraft.

The conversion retained the original Sikorsky concept of placing the powerplant in the nose, with a drive shaft connecting to the main gearbox and rotorhead at the centre of gravity leaving room for a large boxy cabin underneath. However, because the turboshaft was lighter than the previous piston engine, it was installed to one side and other equipment such as radios were moved forward into the nose to maintain balance The first such conversion flew in 1959.

This example (XD163) was originally the very first Whirlwind delivered to the RAF in 1954, powered by a supercharged radial piston engine for anti-terrorist Operations with No 155 Sqdn in Malaya. Later it returned to the UK for No 28 Sqdn. on Search and Rescue duty.

In 1962, was converted here at Weston-super-Mare to a Mk10 with the Gnome turbine engine in a lengthened nose. As the 36th production conversion Mk.10. XD163, first flew again in February 1964. As a Mk.10, XD163 served at RAF Akrotiri, in Cyprus, on Search and Rescue (SAR) duties, followed by a two month detachment, in 1965, to the Khormaksar SAR Flight in Aden.

It returned to the UK in 1966, for overhaul at Wroughton, and subsequent use by the Central Flying School (Helicopters), at RAF Ternhill and RAF Shawbury, with occasional detachments to RAF Valley. It remained at Ternhill until 1979 when it was retired and placed in storage at RNAY Wroughton. The aircraft was subsequently transferred to the museum in April 1991.