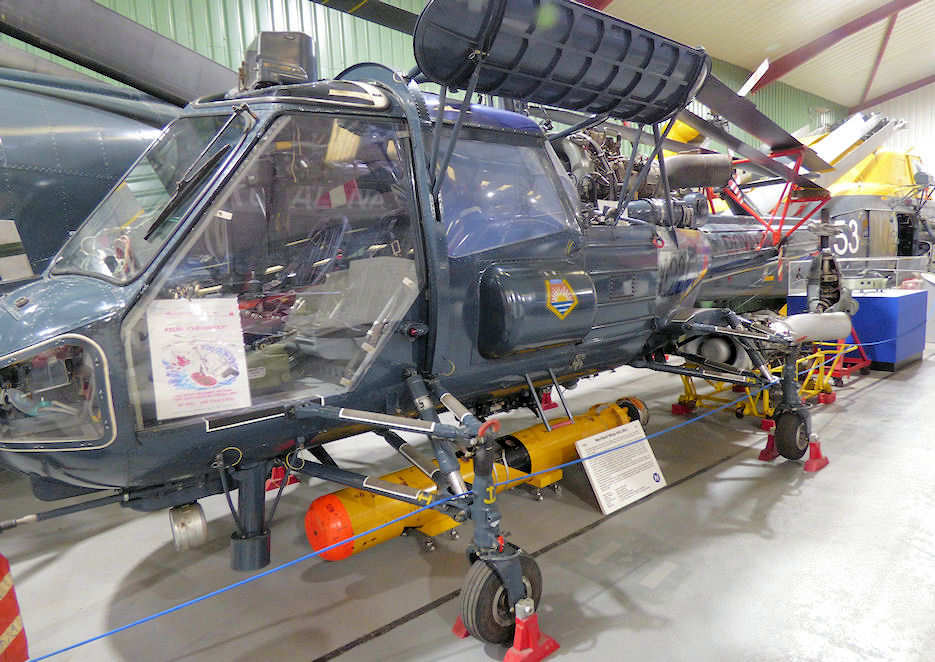 Note: The Wasp had a unique quad undercarriage for landing on a heaving deck. This one served on naval frigates and was damaged during the 1975 Icelandic 'Cod War'.

Details: This naval helicopter was one of two designs, the other being the Army Scout, developed in the late 1950s from the experimental Saunders-Roe P.531, an enlarged Skeeter with a turbine engine.

The Wasp pioneered small-ship helicopter operations. It featured a unique quad undercarriage, able to absorb heavy landings on a heaving deck, with castoring wheels to stop it rolling overboard. Two balloon-type flotation bags were housed in containers above the cabin in case of a ditching at sea, and a short rotor diameter and folding tailboom permitted operation and hangarage within the limited space available on the aft deck of frigates of the period. Intended as an extension of the anti-submarine frigate weapon system, the helicopter used the parent ship to provide guidance to an attack area, carrying two torpedoes or depth charges to launch against located submarines. It could also attack surface ships, using missiles guided via the roof-mounted sight.

The Wasp entered Royal Navy service in 1963, serving on Leander class frigates and other ships. The type was also operated by the Brazilian, Netherlands, New Zealand, South African, Malaysian and Indonesian navies.

This example (XT443) was a typical production machine and served with No.829 Naval Air Squadron on a number of frigates, including HMS Bacchante, Lowestoft, Mohawk, Galatea and finally Aurora. It survived two crashes in the 1975 Icelandic 'Cod War' before being retired in 1987