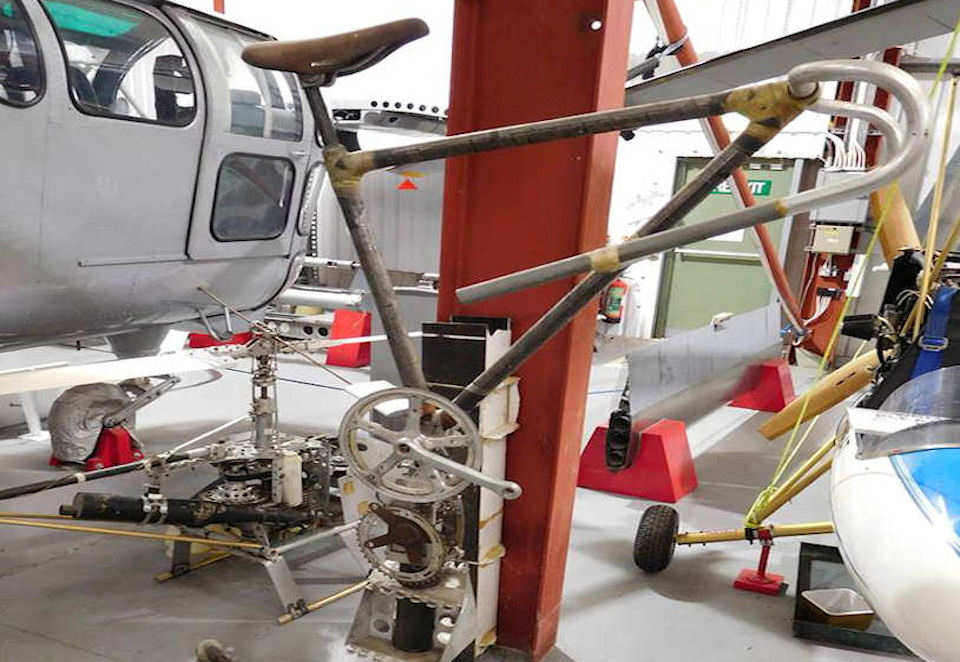 Note: Attempt to win the prize for the first man-powered helicopter to hover for one minute.

Details: Single-seat man powered helicopter built circa 1982 at Yeovil. The Vertigo Man-Powered Helicopter was built in the early 1980s, in an attempt to win the $15,000 prize being offered by the American Helicopter Society for the first man-powered helicopter to hover for one minute and to reach a height of three metres.

The unique project was led by a former product assessment engineer at Westland Helicopters, Andrew Cranfield, and initial tests were carried out under Westland sponsorship in their flight hangar at Yeovil, Somerset. Construction of the helicopter was based on a central pilot's support structure using a carbon fibre bicycle type frame with a standard pedal crank/sprocket assembly and a quadropod undercarriage, married to a two-bladed co-axial rotor of 24.56m (80.58ft) diameter

From a purely aerodynamic viewpoint it was computed that the AHS competition requirements were achievable but in practice a number of dynamics problems were encountered particularly in the transmission area. Strengthening modifications followed, including the adoption of an aluminium alloy crank/spigot assembly, as well as an increasing of the hub separation and the blade root cut out. Despite these changes power output still remained limited, and stability and control problems were also apparent, possibly due in part to wake, re-circulation in the confined hangar space

Subsequently Vertigo was transferred to the old airship hangars at Cardington, Bedfordshire, but time and money precluded continuing development and the project was abandoned in 1988. Vertigo was presented to The Helicopter Museum in April 1989, by which time much damage had been done to the fragile structure, in particular the rotor blades. Nevertheless sufficient of this interesting project has been salvaged to demonstrate the level of technology achieved.