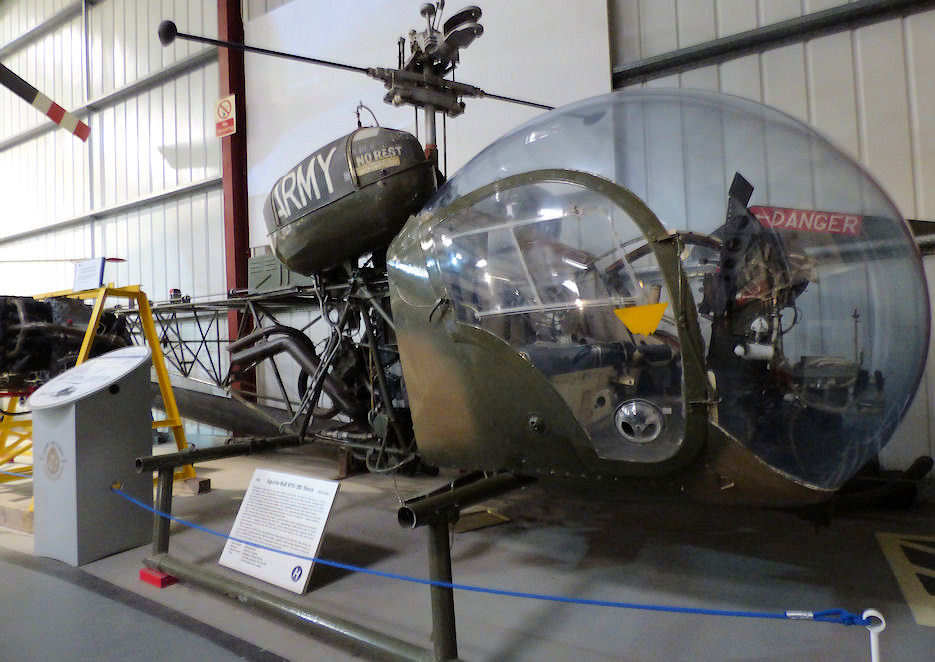 Note: The Sioux was used for aerial observation and casualty evacuation (MASH). This one was assembled by Westland for the Army Air Corps and used by United Nation Forces in Cyprus (UNFICYP) for peace-keeping duties.

Details: Designed originally in the mid-1940s in the USA, the Bell 47 became a classic helicopter with its hall-mark two-bladed main rotor and cockpit bubble configuration.

The simple rotor system had no articulated hub or the hinges common in other helicopters of the period, but instead featured a stabiliser bar weighted at both ends and at 90 degrees to the rotor blades. This simplified controls and maintenance.

In 1946, the Model 47 obtained the world's first commercial helicopter certificate and went on to be produced in several different versions. Production finally ended in Italy in 1978 after more than 7000 had been built

The military OH-13 Sioux was used for aerial observation, training and casualty evacuation (MASH) throughout the 1950-70s. Upgrading in 1963 from a two to three seat cabin, a greater rotor diameter, and a more powerful engine with a turbocharger, produced the 47G-3B1 which was built both in the USA and under licence overseas.

This example (XT190) was assembled by Westland in the UK for the Army Air Corps under a licence held by Agusta of Italy. Issued to HQ United Nation Forces in Cyprus (UNFICYP) in April 1966, it remained there to support the peace-keeping forces until 1978, when it was retired from active service.