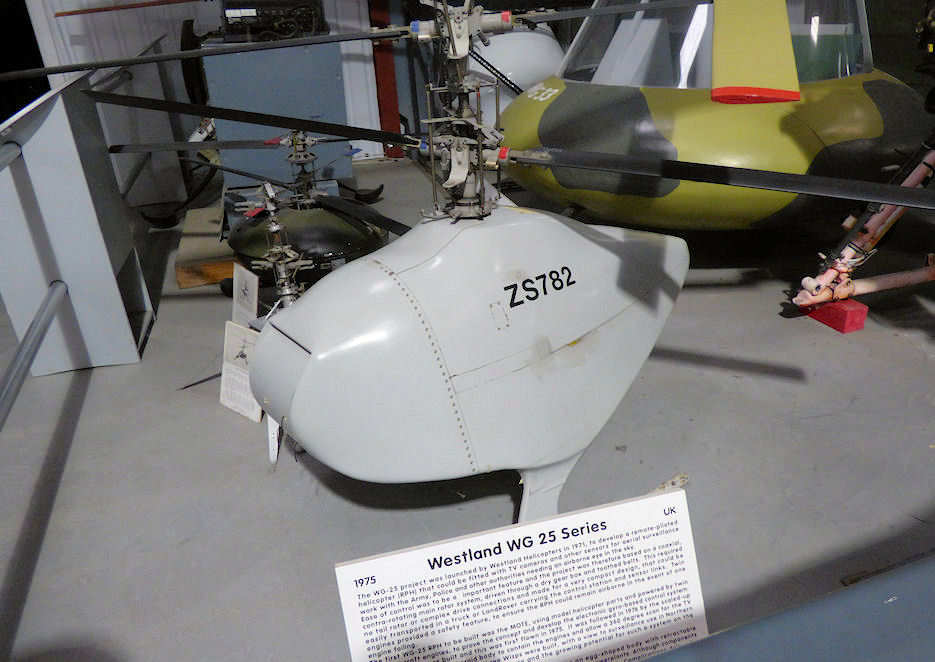 Details: The WG-25 project was launched by Westland Helicopters in 1971, to develop a remote-piloted helicopter (RPH) that could be fitted with TV cameras and other sensors for aerial surveillance work with the Army, Police and other authorities needing an airborne eye in the sky. Ease of control was to be an important feature and the project was therefore based on a coaxial, contra-rotating main rotor system, driven through a dry gear box and toothed belts. This required no tail rotor or complex drive connections and made for a very compact design, that could be easily transported in a truck or Land Rover carrying the control station and sensor links. Twin engines provided a safety feature, to ensure the RPH could remain airborne in the event of one engine falling.

The first WG-25 RPH to be built was the MOTE, using model helicopter parts and powered by twin - model aircraft engines, to prove the concept and develop the electronic gyro-based control system. Only one Mote was built and this was first flown in 1975. It was followed in 1976 by the: scaled-up WISP, which added a spheroid body to contain the engines and allow a 360 degree scan for the TV camera surveillance package. Three Wisps were built, with a view to surveillance use in Northern Ireland, but advancing sensor technology and the growing potential for such a system on the battlefield led to further development.

This resulted in the larger WIDEYE in 1977, introducing an egg-shaped body with, retractable undercarriage legs, a stabilised sensor package and twin 20hp power plants. Although components for 15 Wideyes were manufactured, only the first few were completed. Complications delayed a first flight until August 1978 and the Army contract was cancelled in December 1979.

Further research and development continued for a while and one final W6-25 variant was proposed in 1980 as the SHARPEYE. This featured a redesigned and more 'stealthy' aerodynamic body, built around the Wideye mechanical components. The entire W6-25 project was finally abandoned in 1983 after only a wind tunnel mock up of the Sharpeye was built.

All four WG-25 variants are on display including the only Mote built, the first of the Wisps, a typical Wideye and the full scale Sharpeye