Note: These are the only surviving major components from the sole prototype of the unique Rotodyne compound helicopter.

Details: The Fairey Rotodyne was the culmination of more than 15 years research into compound helicopters by the Fairey Company, which inherited the concept from the Cierva Autogyro Company. This envisaged the marriage of autogyro features, notably the use of a free-wheeling rotor during cruise flight, with the vertical take off and landing characteristics of the helicopter and the wing and propulsive features of an aeroplane.

Early trials were carried out between 1947 and 1956 with the experimental Gyrodyne and Jet Gyrodyne to prove the basic concept but by the early 1950s Fairey was already planning a large civil transport aircraft based on the gyrodyne principle to meet a British European Airways requirement for a 30/40 passenger short/medium haul 'BEAline Bus'. By 1955 the proposal had evolved into a firm project and construction of a prototype initiated under a Ministry-sponsored contract. 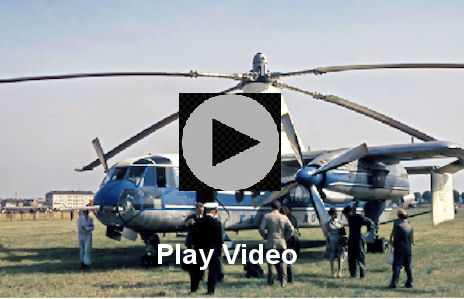 The Rotodyne had two Eland turbine engines driving conventional four-bladed propellers for forward flight and providing compressed air to the rotor, where it was ignited with kerosene in pressure jet units at the blade tips. Air and fuel ducts ran through the forward edge of each blade from the main rotor pylon. After take off, transition to forward flight was achieved by progressively transferring power from the rotor to the propellers, with lift being similarly transferred to the short span wing. As built the prototype enjoyed a gross weight of 14850kg (33000lb) and could carry up to 40 passengers or an equivalent payload.

Prototype XE521 made its first flight at White Waltham on 6th November 1957, but it was not until 10th April 1958 that the first full transition to and from vertical to cruise flight was made. On 5th January 1959 XE521 set up a new convertiplane class (E2) speed record of 207km/h (190.9mph) in the 100km (62mile) closed circuit category, a speed 150.8km/h (49mph) higher than the equivalent helicopter record. In June 1959 the Rotodyne flew from London Heathrow to the Paris Air Show, via the Brussels and Paris heliports, on its first flight outside the UK.

Despite numerous demonstrations and interest shown by New York Airways, the US Army, Okanagan of Canada, the Rotodyne failed to secure a firm order from neither BEA or the Royal Air Force. In February 1960 Fairey Aviation was taken over by Westland and following the withdrawal of government support the project was cancelled on 26th February 1962. The aircraft last flew on 26th January after flying 155.05hrs.

XE521 was subsequently cut up and scrapped at RAE Farnborough, but a fuselage section, rotor pylon and sections of the massive 27.4m (90ft) diameter rotor were salvaged by Cranfield College. There they survived until 1981, when they were acquired by the Helicopter Museum. Subsequently an Eland engine was added and a complete test rotor blade and several tipjets found on an airfield in Gloucestershire where they had been used by Rolls Royce in a noise research programme.

These components were airlifted to Weston-super-Mare by a RAF Chinook helicopter, the blade being too large and heavy to transport by road. These collectively now form the Helicopter Museum's unique Rotodyne exhibit.