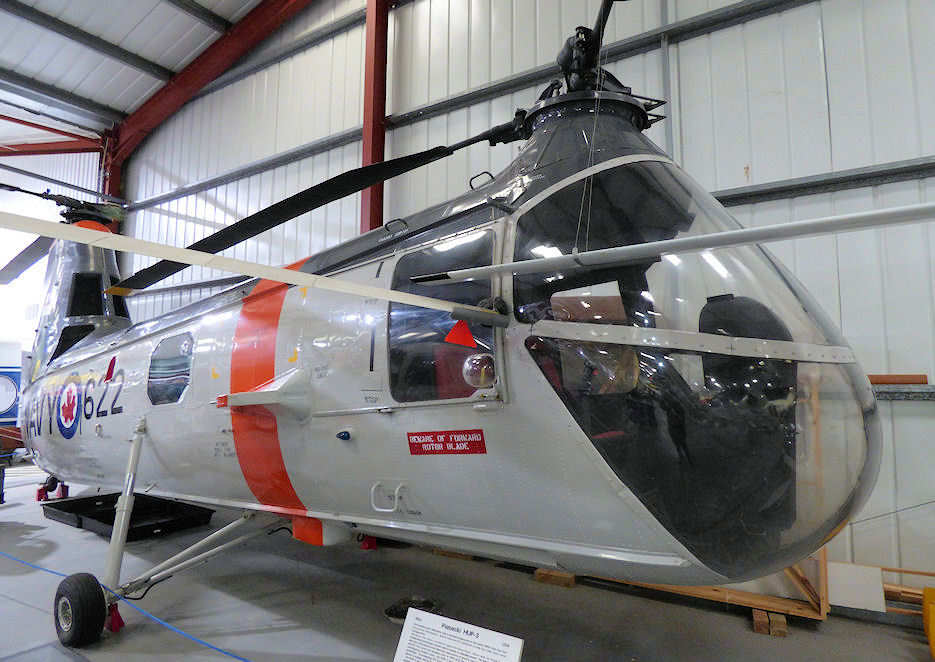 Note: The HUP was the world's first overlapped tandem-rotor helicopter. This one served in the Royal Canadian Navy. A hatch in the cockpit floor allowed personnel to be hoisted directly into the cabin.

Details: The tandem rotor helicopter was a natural progression in the early 1940s from the first successful helicopters, which had mostly adopted a side-by-side twin-rotor configuration. Because the rotors turned in opposite directions, there was no need for a complicated anti-torque system and no waste of valuable power. The tandem rotor was also less affected by wind direction and centre of gravity concerns. Piasecki flew the world's first practical tandem rotor in 1945 and followed this in 1948 with the first overlapping tandem rotor, the HUP-1, powered by a single radial engine mounted amidships. Overlapping the front and rear rotors allowed the helicopter to have a shorter fuselage and to fit more easily on ships.

The HUP was the world's first overlapped tandem-rotor helicopter, and the small overall size meant that the helicopter could fit on aircraft carrier elevators without folding the blades, and could also fit on most cruiser elevators with the blades folded. The early HUP-1 had a fin tail unit to improve stability, but this was replaced in 1950 on the later variants by an autopilot, the first such installation to be used on a production helicopter, and all-weather instrumentation. 32 HUP-1s were built, and these were followed by 165 HUP-2s, some of which were fitted with AN-AQS-4 dipping sonar for anti-submarine warfare. In the rescue role, a hoist was installed inside the front cabin, with a hatch in the floor allowing personnel to be winched directly up into the fuselage. 15 HUP-2s were transferred to the French Navy.

The HUP-3 featured the first ever production helicopter autopilot system and was in service for naval use during the Korean War in the early 1950s. Used for carrier based planeguard and rescue, moving supplies between ships and similar roles, the tandem rotor could be used without need for the ship to turn into wind. A hatch in the floor allowed personnel to be hoisted straight up into the cabin under the direct view and control of the pilot.

The aircraft on display at the museum, serial 51-16622, was one of the three HUP-3s to enter service with the Royal Canadian Navy for utility and search and rescue missions. It was officially accepted at the factory on 14 May 1954. All three HUP-3s were delivered from Morton to the RCN base at HMCS Shearwater in Dartmouth, Nova Scotia, on 18 May 1954, and allocated to VH-21 Squadron for operations with the RCN Arctic patrol vessel HMCS Labrador. Between 1955 and 1957, '622 supported survey and DFW line work in the Arctic area, before being transferred to VU-33 Squadron at Patricia Bay Airport in Sydney, British Columbia, for shore based operations. All three RCN HUP-3s made their last flight in Canadian service on 28 February 1964, when they flew in formation at Patricia Bay. In 1964 it was bought back by Piasecki and used as a chase aircraft for the high-speed experimental Piasecki 16H compound helicopter.

Subsequently it was retired to the Aviation High School in Cleveland, Ohio, where it was used for ground instruction into the late 1980s. By 1990 however, the airframe was semi-derelict, and the HUP-3 was donated to The Helicopter Museum arriving at Weston-super-Mare on 28 November 1990 where it has since been restored