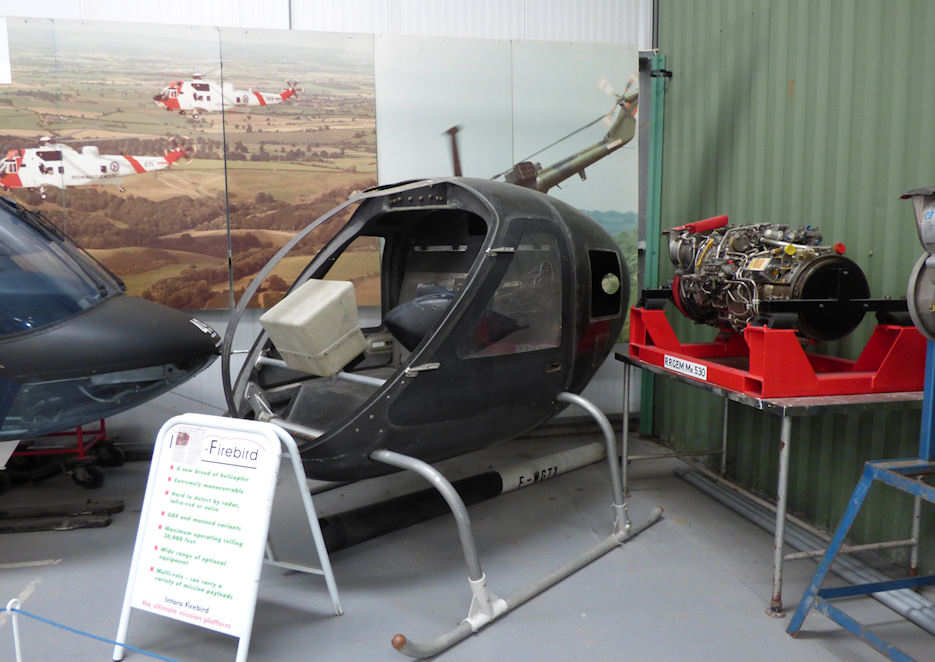 Note: Used hydrogen peroxide fuelled rocket engines installed at the tips of the rotor blades. This exhibit is a composite of two unfinished airframes recovered from storage after development abandoned.

Details: These helicopter projects stem from 1950's technology around the use of hydrogen peroxide H2O2 fuelled rocket engines, installed at the tips of the rotor blades to drive the rotor system, using super-heated steam.

The principal was incorporated mainly in the Rotor-craft Pinwheel one-man helicopter, first flown in 1954 and funded by the US Navy and Army as the aerospace Mini-copter to evaluate use as an air-droppable pilot rescue device. The system was also trialled by Roe and Napier on a Skeeter helicopter at Eastleigh, Hants in 1957.

In the early 1980's, the original programme was abandoned and the project sold to Liteco, which continued development until 1998 when it was acquired by Intora Firebird PHC in Southend, Essex. Two prototypes were displayed at the 1998 Farnborough Air Show, including an open frame Dragonfly DF1 based closely on the original concept and the enclosed cabin two-seat Atlas design.

Intora Firebird ran out of funds in 2004 and the project has been mothballed ever since. A contributing factor was the unavailability in Europe of high grade H2O2 due to the storage and handling risks. The two helicopters went into storage, until they were donated to The Helicopter Museum in 2017

The application of H2O2 rocket power to drive a helicopter is quite rare and these examples are the only known surviving prototypes using this technology. The Dragonfly was first registered in the UK as G-BXZN an Advanced Technologies Inc. CH1 with Constructors No. 00002. The Atlas is a composite airframe, using the main fuselage pod of the unfinished F-WGTZ and the tail boom of F-WGTX.