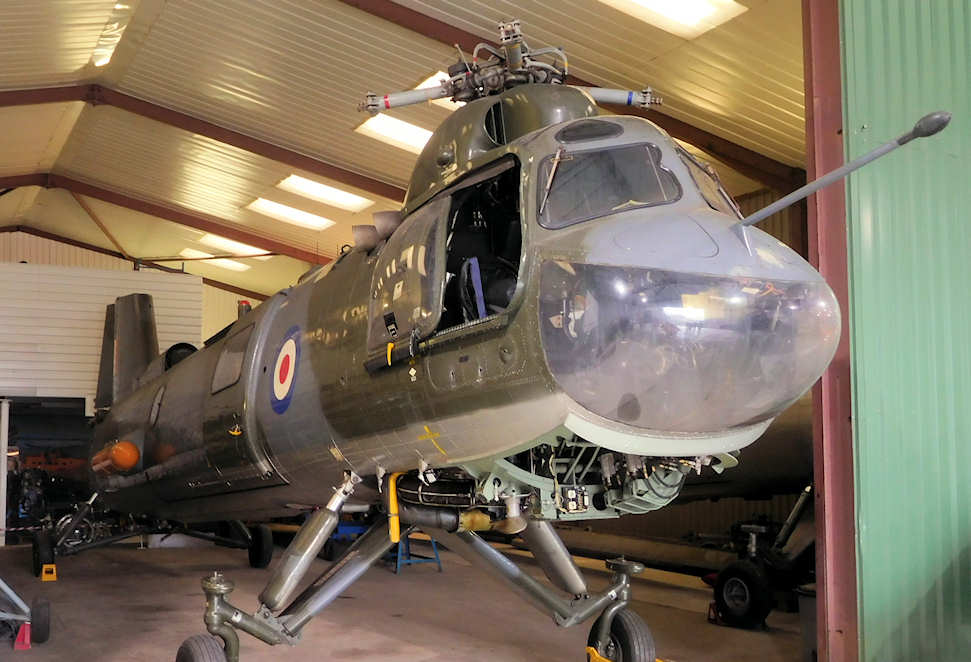 The Belvedere tandem-rotor helicopter was the culmination of ten years work by the former Bristol Helicopter Company on this type of rotorcraft lay-out. Originally designed to meet a Royal Navy of requirement for a carrier-borne search and strike helicopter (hence the legacy of an almost window-less cabin, a high front undercarriage, and the ship-dictated dimensions), the Belvedere was eventually ordered for the Royal Air Force, and served with distinction in Aden and in during the Indonesian confrontation of the mid-sixties. Only 26 were built, all at Weston-super-Mare. There are only three remaining examples of which XG452 and XG454 are here in The Helicopter Museum.

XG454 was the second of three pre-production Belvederes built at Weston-super-Mare for the RAF Belvedere Trials Unit at RAF Odiham. First flown on 18th June 1960 it was delivered to the unit on 14th October 1960, but only three weeks later suffered a double engine failure at 60.96m (200ft) whilst lifting a Land Rover and its trailer on the external hook. Jettisoning the load the helicopter was autorotated onto the grass airfield at 37.4Km/hr (23mph) forward speed but the front wheels penetrated the soft ground and sheared back, leaving the fuselage to skid 18.28m (20yds) along the ground before coming to rest. Repairs to XG454 took four months but the aircraft was reflown on 21st March 1961 and re-entered service.

On 30th August it was flown to Farnborough for rehearsals for the Farnborough Air Show where it took off with 25 paratroopers and 3 crew. Whilst transitioning from flaring to land it was caught in a crosswind and became difficult to control, striking the ground heavily tail first before collapsing the front undercarriage. The aircraft was written off and spent the next three years being used for ground instruction at RAF Netheravon but was resurrected and moved back to the Weston factory on 15th October 1964 for rebuilding. This involved manufacturing a new rear fuselage and repairs to the centre fuselage and nose before it flew again on 23rd February 1967. Although cleared for re-delivery in June 1967 it was retained at the factory to clear minor vibration issues and then stored between January 1968 and April 1968.

On 20th May 1968 XG454 was flown to RAF Abingdon but withdrawn from use on 25th. It was displayed at the Queens review of the Royal Air Force on 15th June 1968. XG454 remained at Abingdon until 13th May 1969 when it was moved to RAF Henlow for storage for the embryo RAF Museum. It remained there until 1972 when it was placed on loan to the Museum of Science & Industry (MOSI) in Manchester and was on display when that museum opened on 30th March 1983. In 2016 a change in MOSI policy led to the RAF Museum transferring ownership to the Helicopter Museum. XG454 eventually returned to Weston and the Museum on 21st January 2022 where it is now on display alongside its sister XG452.